Note: Wormholes are a new phenomenon and their mechanics may change with little or no warning. Use the formulas in this page at your own risk.

Wormholes do not appear immediately at the start of each game in which they exist. Instead there is a chance that a new wormhole will appear each turn until the maximum number ( Max Wormholes setting) has been reached.

Wormholes are either bi-direction (two way) or uni-directional (one way). The chance of each is governed by the Wormhole Mix setting. They do not change directions during their lifespan.

Wormholes start with a stability between 98 and 100, putting them in the Highly Stable stage.

When a wormhole drops to zero or lower stability it collapses and a new wormhole is formed one to two turns later.

Each wormhole has a stability value which is scanned in the Sensor Sweep mission, if the wormhole is within scan range (governed by the Wormhole Scan Range setting). Each wormhole also has a hidden value called the Maximum Stability Change (MSC for short). The MSC value is the maximum amount that stability can increase or decease by in one turn.

There are three different formulae for calculating the MSC, depending on the stage in the wormhole's lifespan – the Highly Stable , Moderately Stable and Unstable stages.

During the Host Order "wormholes spawn and change" phase the stability can increase, decrease or remain the same. The increase and decrease can be by any value between 0 and the MSC, with all values in equal probability.

Although the Highly stable range band is tiny (just 5% of the total range) the MSC is so small that wormholes remain in this stage for roughly 50% of their lifespan.

It is common for Moderately stable wormholes to move back into this stage and re-stabilise themselves.

The Moderately stable stage is the largest of the three range bands (50% of the total range). This stage has a very steep increase in MSC for every point of stability lost:

This steep increase in MSC can cause the wormhole to gradually spiral out of control, or jump back up to regain stability. However, the average change per turn remains exactly at zero (50% chance of an increase and 50% chance of a decrease).

The wormhole therefore tends to randomly wander up and down this stability range for a long time before moving into the Highly stable or Unstable stages.

Wormholes spend roughly 45% of their lifespan in this stage.

The Unstable stage is almost as large as the Moderately stable stage (45% of the total) but the MSC is so large that wormholes typically spend a short time in this stage.

What marks this stage different from the Moderately stable stage is that the MSC increases at a very low rate per point of stability loss – so it forms a plateau.

Wormholes can remain in this stage for a few turns, but eventually they will make a large jump. These large jumps can quickly move the wormhole back into the Moderately stable stage, or can drop it to below 0 stability which will destroy it instantly.

Wormholes spend roughly 5% of their lifespan in this stage.

For each point of stability below 100 points, there is a 1% chance of a ship taking damage while transiting a wormhole.

The ship’s hull mass does not affect the chance of damage being dealt.

Example: a ship has a 2% chance of being damaged when transiting a 98 stability wormhole.

If a ship is damaged by a wormhole, then the damage is calculated as follows:

The graph below shows how the MSC changes as wormhole stability drops. Note the three distinct stages of the wormhole's lifecycle have different slope gradients. 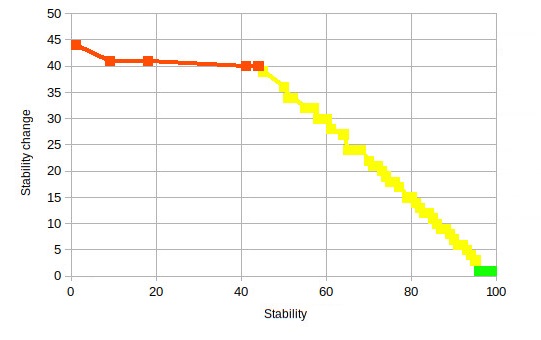