There are a few starships that have been designed with the ability to perform a Hyperspace Jump, or Hyperjump. Due to limits in the technologies being used, only certain starships (all very small) have this ability.

When a starship performs a Hyperjump, the engine consumes 50 KT of Neutronium. This fuel allows the Hyperjump engine to quickly transport the starship to any destination between 340 and 360 light-years from where the starship started. This takes place during the standard movement phase.

In order to instruct your starship to Hyperjump, you must set a course in the direction you wish to travel with a destination greater than 20 light-years, set the speed greater than Warp 0, and set the Friendly Code to HYP . If the distance selected is not within the range of 340-360 light-years, the starship will travel 350 light-years on the selected course. You can fine-tune the destination. Take special care with planetary Warp Wells , as only the inner two rings (green squares in image below) will draw your ship to the planet. 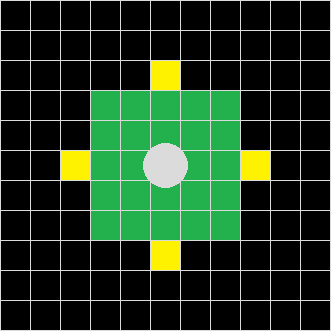 Note: Towing a starship set to Hyperjump will cancel the jump.

See also: Out of Fuel.